The “BGI” Theory, The Internet Extortionists’ Plan To Destroy It, And The Kendrick Johnson Investigation – Part 7 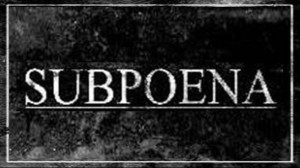 On Twitter, after more than a year of having a protected account, in October 2015, David Piercy opened his account to public and tweeted to individuals that their Twitter account information was subpoenaed. The subpoena was issued by the attorney for the Bells, who filed a counterclaim alleging that Kendrick Johnson’s parents committed defamation and used “authorized agents” to commit defamation.  A day or so after Piercy tweeted his knowledge of the subpoena, 22 of the people whose handles are in the subpoena were notified by Twitter that their account information had been requested, including their IP addresses.

People began to wonder how David Piercy knew that their account information was subpoenaed before they were notified by Twitter.

Just before that happened, on October 16, 2015, the Department of Justice filed motions that were pending. One was a motion to intervene and the other was related; they wanted to intervene to request the court to stay proceedings in the civil case for 180 days in light of pending criminal prosecutions. If proceedings were stayed, then discovery was stayed and there would be no need for the 22 people to do anything other than wait for 180 days.

Thereafter, Piercy and several others on Twitter misrepresented the subpoena as a summons and attempted to intimidate those whose handles were subpoenaed to believe that they were being sued by the Bells for defamation. Subsequently, the court denied the DOJ’s motions.

Piercy submitted a combined total of about 10 comments to my two blogs, arguing that the amici brief was not filed. He telephoned the clerk of the court and asked if an order had been entered granting the ACLU leave to file. He then misrepresented the call, saying that the ACLU had not filed a brief.   He also argued that Twitter had not come to court to quash the subpoena.

David Piercy is supposed to have received an Associate’s Degree as a paralegal. I did not want to give Piercy a lesson on third-party discovery procedures, so recommended that he speak with an attorney or use his school resources.  Now that the Bells have filed motions, I can address the proper procedure for when a party issues a subpoena to a third-party for information pertaining to non-parties. I am not a lawyer, and the following is information in the simplest terms.  It is not legal advice.  Anyone can feel free to contact a lawyer for verification or explanation.

When comparing the two motions, the Bells’ have apprised the court that Twitter responded and that they do not intend to compel Twitter to comply with the subpoena.

The word “responded” is not the same as “complied” and that is important to keep in mind when considering the Bells’ December 14, 2015 motions.

It is my understanding that discovery has been closed in that case. Also, I have it from a very reliable source that Twitter did not turn over any account information for any of the person’s whose handles are in the subpoena.  If anyone whose handle is in the subpoena has concern about this, don’t take my word, or Piercy’s word, but go directly to the source and contact Twitter.

This entry was posted in cyberharasment, The BGI Theory and The Internet Extortionists Plan To Destroy It and tagged ACLU, Kendrick Johnson, KJ23, subpoena, Twitter. Bookmark the permalink.

21 Responses to The “BGI” Theory, The Internet Extortionists’ Plan To Destroy It, And The Kendrick Johnson Investigation – Part 7