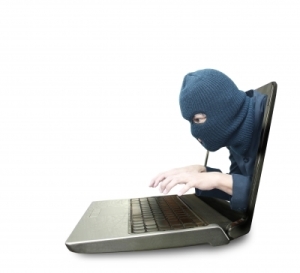 I believe that all of mankind is created equal and that people should not be judged because of the color of their skin.  There are people of all colors who believe the same.  However, there are also  people who believe that Whites are superior to all races.

Those ideologies are personal as long as they don’t interfere with the rights of others.   This post provides support that what the subject extortionists perpetrate extends beyond the internet and is intended to harm their targeted victims in their personal lives.

What I share in this post is evidence of intimidation to extort, and that evidence will show why I consider that those perpetrating the activity are White Supremacists intent on depriving others of constitutional rights and privileges.

The following are pertinent parts from Findlaw. Emphasis added.

“Most states define extortion as the gaining of property or money by almost any kind of force, or threat of 1) violence, 2) property damage, 3) harm to reputation, or 4) unfavorable government action. While usually viewed as a form of theft/larceny, extortion differs from robbery in that the threat in question does not pose an imminent physical danger to the victim.”

“Extortion can take place over the telephone, via mail, text, email or other computer or wireless communication. If any method of interstate commerce is used in the extortion, it can be a federal crime.”

“Virtually all extortion statutes require that a threat must be made to the person or property of the victim. Threats to harm the victim’s friends or relatives may also be included. It is not necessary for a threat to involve physical injury. It may be sufficient to threaten to accuse another person of a crime or to expose a secret that would result in public embarrassment or ridicule. The threat does not have to relate to an unlawful act.”

“Other types of threats sufficient to constitute extortion include those to harm the victim’s business … Many statutes also provide that any threat to harm another person in his or her career or reputation is extortion.”

“Section 241 of Title 18 is the civil rights conspiracy statute. Section 241 makes it unlawful for two or more persons to agree together to injure, threaten, or intimidate a person in any state, territory or district in the free exercise or enjoyment of any right or privilege secured to him/her by the Constitution or the laws of the United States, (or because of his/her having exercised the same). Unlike most conspiracy statutes, Section 241 does not require that one of the conspirators commit an overt act prior to the conspiracy becoming a crime.”

“The penalty for violating Section 241 of Title 17 is;  They shall be fined under this title or imprisoned not more than ten years, or both; …”

Beginning around January 2013, the extortionists sent comments to other bloggers defaming me, and demeaned them for associating with me.  At the same time, they submitted comments to Blackbutterfly7 accusing me of operating that blog for money, paid by Florida attorney Benjamin Crump.  (The evidence that they did this is available but presenting it here would make this very, very long.)

Prior to about July 2013, those bloggers receiving the comments were familiar with the extortionists because they also received comments from them that accused them of every wrong, and called them every vile name imaginable.

I too received demeaning, defamatory comments about other bloggers, including comments that consisted of the purported personal information of others.  (The senders assumed that I would know the people they were talking about, and also assumed that I would be interested in their personal lives.)  I considered those comments as an act of intimidation and showing me their handiwork of what they would do to me unless I complied with their demands.

After the verdict in the George Zimmerman case in July 2013, I began writing on different subjects, and that drew the interests of  other bloggers who subscribed, some that reblogged posts I wrote, and/or clicked “like” and/or commented on Blackbutterfly7. Their appearance gave the extortionists new blood – bloggers who had no experience with their harassment nor knowledge of their methods.

On November 25, 2013, based on a report by CNN, I wrote an article titled “George Zimmerman’s Guns.”

Dr. Rex reblogged that article and made the following comment; 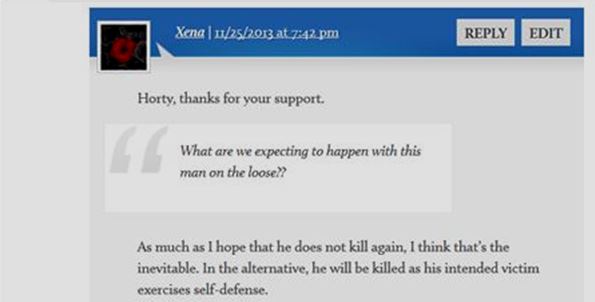 On December 1, 2013, Michael Thacker, then on Twitter as “El_Hoff71”, tweeted the following to JadedJustice. (We suspect that JadedJustice posts comments on blogs and forums as “JJ”.) 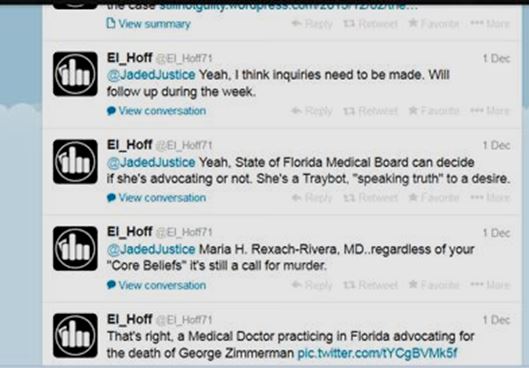 Thacker misrepresented Dr. Rex’s comment, accusing her of “advocating for the death of George Zimmerman” and he wanted to report her to the State of Florida Medical Board because he thinks she’s a “Traybot.”

(As a note for those not aware, those who support Zimmerman believe that he killed Trayvon Martin in self-defense and they don’t like others using the word “murder” in describing Zimmerman’s actions. They should have understood “self-defense” in the context in my exchange with Dr. Rex according to how they use the same term.)

Reasonably believed, the anonymous sender of the following comment was Michael Thacker or JadedJustice. Even if not JadedJustice nor Thacker,  Thacker’s tweets provide evidence that he initiated the scheme.

On December 10, 2013, the following comment was submitted to Dr. Rex’s blog. It is a copy and paste as presented to me, but Dr. Rex also reported it to Word Press and you can read it in their forum.

“Submitted on 2013/12/10 at 11:54 pm
Wowza YOU are certainly being discussed on Twitter AND Facebook lately!!
–”Her name is Maria H. Rexach-Rivera, MD (Florida). That’s correct…. an MD calling for the murder of another human being!! Can you believe that? Someone needs to get in touch with her clinic or workplace. I wonder what her patients would think if they saw those screenshots of her yukking it up with known virulent black racist pig Xena from the BlackBitch7 blog.”

–”You mean that Dr. Rex creature that re blogs all the shit that the UBER-racist Xena Barbara Wells puts out??”

–”Yes that’s her. She is the MD who has called for the murder of George Zimmerman. Check out the screenshots”.

–”Oh! She’s the one who likes to make up those stupid, third-grade quality “blog awards” to pass out like desperate Valentines or something!!!”.
#pleasebemyfriend
#desperationcentral

((and then there are screenshots of YOUR horrible written exchanges with the ultimate black RACIST/LIAR/PERJURER/ASSHOLE “Xena” (Barbara J. Wells of Illinois).))
mmm busy bee…..”

It disparaged and defamed me, alleged knowing my real name, and where that person resides. Their evidence? None.  Additionally, none of that was in the tweet exchange.  The purpose behind adding it was not only to defame me, but to give Dr. Rex the impression that she was being associated with me publicly in a negative manner on Twitter and Facebook.

Based on my experience, I knew that the extortionists’ defamatory and demeaning comments did not hinder other bloggers from exercising their constitutional right to freely associate.   I wondered what would be the result if the extortionists believed that their scheme worked. Dr. Rex and I worked something out.  She stopped participating on Blackbutterfly7.   It did not take long for the extortionist to respond.

On December 13, 2014, Dr. Rex received another comment of about 20 pages long that, assuming our races or how we racially identify, alleged that although I have “white buddies” that I only socialize with and respect blacks.  Their evidence? None.

On or about December 14, 2013, the perpetrator submitted a comment to Dr. Rex and to Blackbutterfly7 as a “CCed to Dr. Rex.” Don’t concern yourself with the IP address not being redacted because it is a proxy IP address.  It took 2 screenshots to capture the diatribe. 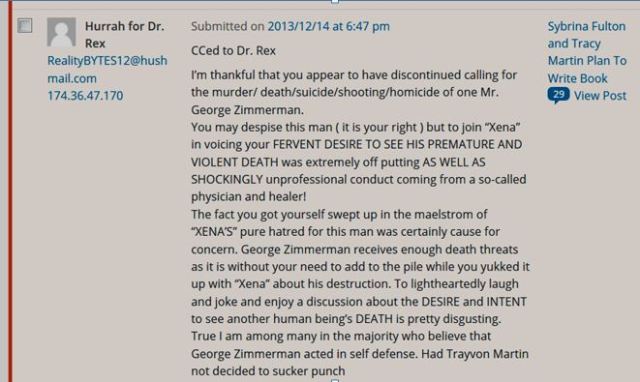 The first comment conveyed targeting Dr. Rex for extortion unless she disassociated with me, because the second comment congratulated her for getting the clue and doing what the extortionists wanted.

Insulting Dr. Rex’s intelligence that she does not read what I write  on Blackbutterfly7, the sender stated that I operate a “hate blog” and “despises white people with a deepest passion.” Evidence for those accusations should be easy to find within the content of what I post on Blackbutterfly7. They could have supported their accusations with a link to the blog, and they have hundreds of posts that I’ve written to choose from. But their evidence? None.

More importantly are words in the comment that speak volumes;

There we have it — the White Supremacist ideology of race superiority.

Thirteen months later, in November 2014, Vicki Pate posted a defamatory post on her blog about me in retribution for my reporting on the article written by WCTV on her having Kendrick Johnson’s autopsy photos on her blog. Thacker, as Hoff71, appeared in the comment section to cheer Vicki on.

In one of his comments, he stated as a matter of fact that “Dr. Rexarch did violate Florida Medical Ethnics.”  Thus, it was almost a year from the time that Dr. Rex was first contacted by Thacker or someone he influenced, to the time that Thacker was still contributing to Vicki Pate’s defamation/extortion scheme.

Blogger removed that page from Vicki Pate’s blog, but not before we took screenshots, the relevant portion below:

Remember his tweet of December 1, 2013? In it, Thacker wrote; “Yeah. The State of Florida Medical Board can decide if she’s advocating or not.”

Thirteen months later, why would he state as a matter of fact that Dr. Rex “…did violate Florida Medical Ethnics …”?

The answer? Because after Dr. Rex received the congratulatory comment from Thacker or someone he influenced, she began participating again on Blackbutterfly7. Thus, he outright slandered Dr. Rex almost a year later because she did not surrender her rights to freely associate with whomever she wants.

The White Supremacists did not leave Dr. Rex alone. In 2014, she received another comment alleging that Santiago, a writer for Blackbutterfly7, was on Twitter under a handle that expressed anti-homosexual opinions.  In that comment, the sender told Dr. Rex that I am a “fraud” who really despises her because I let Santiago write for the blog.

The most incredible thing about the handle the extortionist alleged to be used by Santiago on Twitter is that the extortioners claim to have doxed that person, allege that his real name is Paul, and that he is a resident of Chicago. At the same time, they know Santiago’s real name and that he resides in the State of California.

United States citizens have the right to freely associate with others regardless of race, color, religion, gender or sexual orientation.

It is clear that Michael Thacker and JadedJustice engaged in actions to deprive myself and Dr. Rex of our constitutional rights, and they did so because of their racial ideologies.