The Real Intent Behind The Misspelled Titled Blog – Part 1

I’m late reporting this, but around September 2015, the persons originally reported on this blog as harassers have left me alone.   Peace feels good. There is still a blog that mocks and claims to have doxed material, but for the most part, it looks like they have moved on.

In November 2015, a new person took their place.   The situation is different.  Previously, the harassment began due to disagreement in the George Zimmerman case.  I did not know the people personally.  They were strangers and I never engaged them on or off-line.

Santiago Rodriguez, however, is not a stranger.  He first asked to write for my other blog.  About 4 months after his first post was published, he asked to be referred to an attorney I know. After he retained that attorney, Santiago called me everyday, all day long.  He has a restraining order against a man named David Piercy and he wanted to tell me what to post to humiliate David Piercy.  He did so much more that it would take a book to document it all.  My refusals to do what he wanted resulted in him becoming more controlling, more verbally abusive.

Giving him writer privileges for my other blog, and editing his writings by adding punctuation and paragraphs, was not all that I did for Santiago.  I also paid for court documents on his behalf because he said his ex-wife petitioned the court for her current husband to adopt the three children she had with Santiago.   Santiago told me that his current wife had left the house with the credit card.  I didn’t mind going online and purchasing the documents he wanted and emailing them to him.

On the evening of November 22, 2015, I terminated Santiago’s writer privileges.  On the morning of November 23, 2015, he began a campaign of harassment that included emails, direct messages on Twitter via one of his anonymous accounts, and comments submitted to this blog.  Stupid me.  I did not understand what he meant by Twitter “app” in one of his direct messages until most recently.  After being informed that Santiago went on a whisper, smear campaign to provoke people to unfollow and/or block me on Twitter, I then realized that his November 23, 2015 direct message was to convey that he was working to have all of my Twitter followers unfollow me.

His harassment and intimidation has been relentless.  In December 2015, he got Soroya Fambro to join him.   I have documented some of the background at this link.

If anyone is interested in finding how the creator of the misspelled blog is  promoting her misspelled titled blog, click the embedded link to go to the conservative treehouse and search for “flight attendant.”  You might also get a chuckle at seeing her go off topic and that no one responded to her.  (Note, I just checked the link the evening of July 11, 2015.  If she reads this, and there are  responses to her comments, they will be dated after she reads this, indicating they were made from one of her sock accounts.

Unlike the cyber abusers, what I write on this blog will be supported by screenshots of their words, or quotes with links, or other documented evidence. At times, rather than posting numerous screenshots, I will use the best evidence that might consist of one or two screenshots.  Although I might emphasize something in their statements, I will not introduce them, like the cyber abusers do, by using descriptive adjectives, mockery, or misrepresentations in effort to project what is not in the content.

There’s much to share so I’m presenting this in “parts” with effort to present each thread or stage of their extortion practice in a separate part.  I apologize for the length, hope you find it time-worthy, and I appreciate your time.

Out of that handful, there are five people who have made their consistent conspiracy of extortion known. Why am I so important to them? Who are they?  In 2012 they used the excuse that they attacked the “false narrative” of “Traybots,” but the George Zimmerman trial ended on July 13, 2013 — their extortion conspiracy has not. After almost three years, why haven’t they stopped?

On August 17, Michael Thacker was honorable enough to apologize and also encouraged others to move-on with their lives, writing:

I think it is high time, beyond time that everyone goes back to their own corners and take a deep breath and stop this never ending circle of internet hatred. This “war” began in the Trayvon Martin trenches and it is obvious some people have trouble letting go. I will not go into the ins and outs of everything that has transpired over the past couple of years, but will just say that I had a conversation with Santiago..and you know what? I found him to be quite an ok dude. I am sure that if peeps would take a moment and get to know another on a human level, it is easier to step away and say “Hey, this isn’t just the internet”.

Things have happened, and things have been said. I said my piece to Santiago about it, I made my post about it and it is time for me to move to other pastures.

Before that, I want it to be known (and I am going on record here) that I cut DP out of my internet conversation a long time ago. His anti-Christian hatred and his obsession with the personal fights got to be overwhelming and you heard it from me he is a toxic internet presence and I am not so sure if his online versus real life demeanor is two separate entities. I had no clue the level of Annettek and VP endeavors, but I have indeed watched certain people go from Mostly Harmless to outright vindictive and mean spirited. I have never encouraged anyone to act out, but I do understand that people take things said and run with that ball..and for that I am, as I said to Santiago, sorry.

I came from the old usenet flame groups, and I realize that this isn’t what the internet is anymore.

Xena, all I want is out. I have things going on in the real world that I want to focus my energies on. I don’t want to be distracted by all this nonsense anymore..from any side. Rumpole is a good “internet” friend to me, and watching my friend get pummeled by a random stranger telegraphs to me that it isn’t good, for any of us to continue.

Lastly, if DP, VP, AK or any of the myriad of personal internet peeing contest members read here..STOP IT. Take some time off, get out of the house and start enjoying life. If you truly do “follow” the things I say? Leave Xena, Santiago, and anyone contrary to your life viewpoints the heck alone.

BTW..flightattendentfailures? No longer a WordPress site as of this morning I noticed.

Vicki Pate, from her Twitter profile that is now suspended.

aka Re-Newsit, Re-News-it, VLPate, VL2 and many other handles).  Vicki Pate has corresponded with me to give her side of things.  We have a truce. 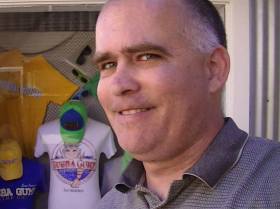 David Piercy.  In March 2017, David apologized to me.  We do not discuss social issues.  I’m not going to change my position, and don’t anticipate that he will change his position.  People can be civil without agreeing with each other about social issues.  There were people who disapproved of him making peace and you can read about that here.

I’ve had no communications with Annette, but it appears that she too has moved on. 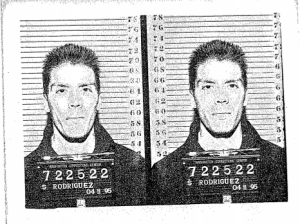 Santiago Carlos Rodriguez.  After months of talking to me about the above harassers in an empathetic way, Santiago adopted what the above persons had done, including doxing the wrong individual.   He has gone further and threatened some of my online friends, and has  attempted to dox my son. Accusing someone else of being me on Twitter, he wrote, “Fuck you and die bitch may death become you and your family”.  After scheming to have a Black man suspended from Twitter, Santiago took over the handle and identity.  By impersonating being a Black man, he called me “zebra” and Blacks “coons” so it would not appear that he was being racist against his own race.

Soroya Fambro.  A complete stranger, she made herself known to me on December 18, 2015.  What she has posted on Twitter comes from Santiago, even to screenshots of work product that only Santiago and I had access to.   Soroya gave a radio interview, and you can read about and listen to it at this link.

Their method, including defamation, and posting the personal information of others on the internet, (whether true or untrue); attacks on and threats to those who associate with Blackbutterfly7, clearly indicates a conspiracy in violation of federal law. Collectively, I call their methods “extortion” because they demand that I do something to end their abusive course of conduct.

Their demands have consisted of, but are not limited to, to stop associating with other bloggers, deleting blogs, reporting only on “black on black crime,” or writing solely about “black on white crime”. They do carry out their threats.

Dylann Roof, charged with 9 counts of murder and 3 counts of attempted murder with his influence being a website that promotes White Supremacy.

The seriousness of what they do is an indicator of inspirations that led to Dylann Roof entering a house of worship and murdering 9 innocent humans because of the color of their skin. His manifesto reveals that his interest started with Trayvon Martin and “black on white” crime. 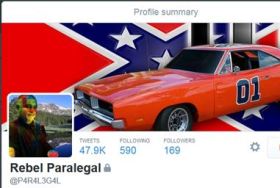 The extortionists perpetrate the conspiracy with the specific intent to deprive me, and those associating with me, of our federally protected right to exercise and enjoy associating with others regardless of race, gender, age, religion, or sexual orientation.   Their violations are because of race or what they perceive as race, to the inclusion of referring to those who have identified themselves as White as being “White guilt idiots.”

These are not mere internet trolls. They are people who have deliberate, calculated actions to rid the internet of those who oppose their ideologies. Truly, I had no knowledge of the extortionists until they knocked on the door of my internet home and threw their garbage of threats and harassment — and wouldn’t stop.  The first threat came in September 2012. They had lurked on blogs where I posted comments and the moment I announced the opening of Blackbutterfly7, I received the first threat.

The first threat was that they would ruin my reputation if I continued participating on another blog.  What reputation? What I shared publicly about myself is that I am a native of Chicago, retired; a widow with an adult son who served 12 years in the U.S. Armed Forces; that I love dogs and have one, and that I occasionally take on research projects for attorneys.

Approximately 3 months after receiving the first threat, the extortionists made up careers for me that they said I was not in order to ruin the “reputation” that they created.   Here’s a small sample of how they went about that. 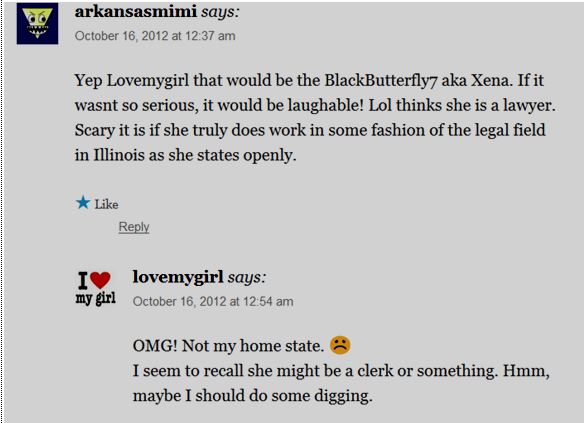 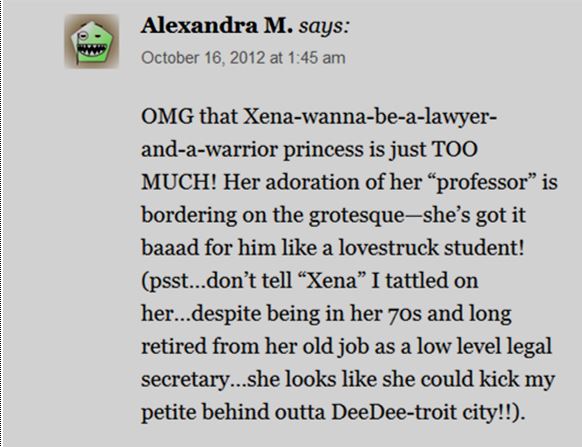 I suppose that this is my photo where I look like I could kick her behind. 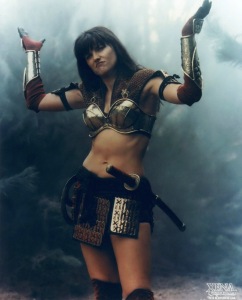 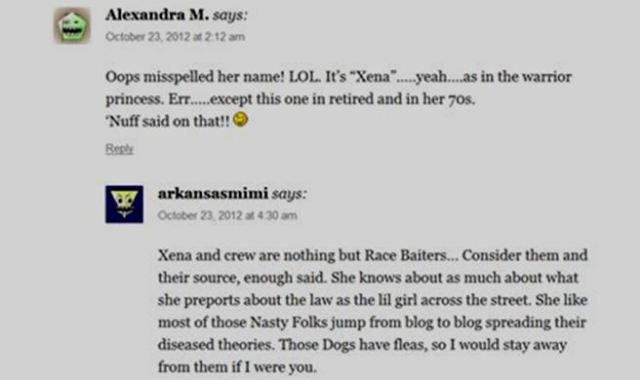 When Thacker came upon a court decision for a person who the extortionists say worked as a librarian, they said that it is me and accused me of being a “fraud” with no legal experience.  The court decision that they rely on was entered in 2012.  Thus, in 2012-2013 after they stated as a matter of fact that I’m a “long retired” low-level legal secretary, or a clerk in my 70’s named “Barbara J. Wells”, the extortionists then claimed that I quit my job as a librarian, and applied for unemployment benefits in 2012 after failing to get a job as a flight attendant.

Eventually, AlexandraM stopped her public attempt at humiliation. Arkansasmimi continued her handiwork for awhile on Annette’s blog.   Now, that the old-timers appear to have moved on, Santiago Rodriguez has taken their place.